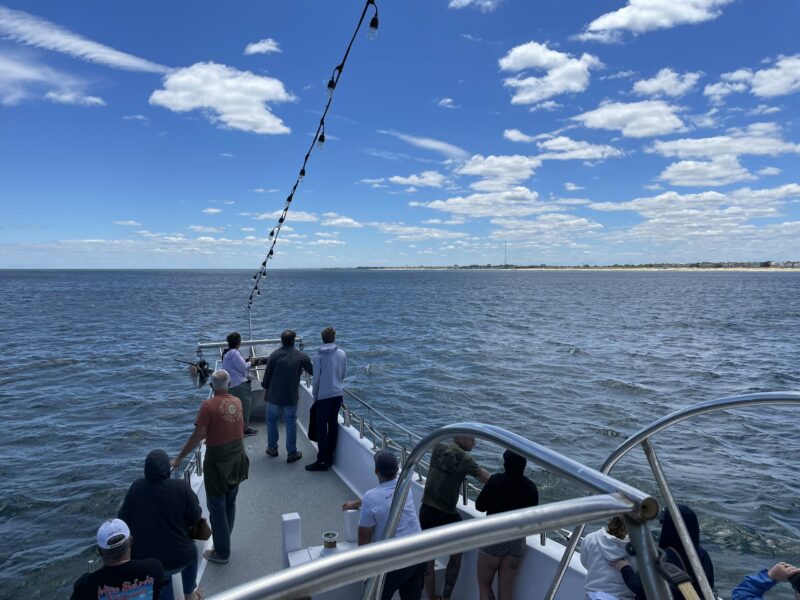 I will add more whale photos from today in the morning

Today’s sea adventure began before the actual adventure. Weather was iffy and the winds picked up. Flags were straight out meaning they wind was really blowing. There was a possibility that the trip would be cancelled at the last minute. The positive was that a whale was seen earlier in the morning off of Deal and Long Branch and then aroubd 11 am near the Belmar/Spring Lake border. Decision was made to go since the whale was so close. Today’s fearless group of adventurers included people from West Virginia and Arizona and places in New Jersey like Princeton, Morristown and Toms River.
Did I say the wind was blowing? I actually got off of the bow of the boat before they asked us to step back off of it as we were leaving the inlet. Once we turned south, the land was blocking the westerly wind so the water was fairly calm. We left the dock at 1:30 pm and by 1:53 pm we were close enough to whale # 254 to get pictures. It was In the Sea Girt/ Manasquan area. It came up close to the boat at least 3 times, both sides and in front, with the closest passage seeming to be about 10 feet away. Engines were off so he was checking us out!, He was so close that I could not fit the entire whale in one picture. In most of the pictures you can see scarring on the whales body. That can be from getting hit by boats, injuries caused by other animals or entanglements from fishing type nets. This whale seemed to be feeding not far under the surface because he was not taking deep dives. At times the whale was in only 31 feet of water. Some of my pictures show how close he was to the beach. Wonder if the people on the beach noticed the whale and if not, they should have wondered what the boat was doing there! Hope the people didn’t have their faces in the phone and missed the beauty of nature. After 3 pm, the winds really picked up and the decision was to get to the dock early because trouble was brewing out on the water. On the way back there were some dolphins spotted. What a great adventure once again! Everyday is an adventure and everyday is a different experience as the whale watching is in the wild.